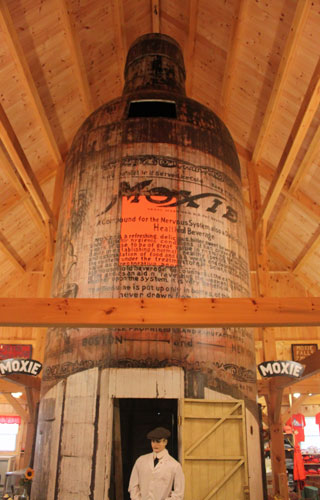 The best information available leads us to report that Moxie was invented by Dr. Augustin Thompson, a native of Union, Maine, while in Lowell, Massachusetts in 1884. The first bottle of Moxie Nerve Food was sold on March 7, 1885. Moxie was patented in July of 1885 and has been continuously produced since that time.

From 1928 through 1953 Moxie was bottled at 74 Heath St. in the Jamaica Plain section of Boston, Massachusetts. The building, known as Moxieland, featured an advertisement on the roof along with an arrow pointing in the direction of Logan Airport. Moxie was said to cure ailments ranging from "softening of the brain" to "loss of manhood."

In 1884, it was sold in carbonated form and merchandised as an invigorating drink, which claimed to endow the drinker with "spunk." In the early phase of its life as a recreational soft drink, Moxie is said to have been kept handy by bartenders to give to customers who were too drunk to be given any more alcohol. This story may be apocryphal, however, inspired by Moxie's noted aftertaste, which many people find unpleasantly strong.

The popularity of Moxie produced popular advertising jingles, such as "Just Make It Moxie for Mine," and President Calvin Coolidge was known to have favored the drink. Boston Red Sox slugger Ted Williams endorsed Moxie. Author E. B. White, an adopted Mainer and noted Moxie fan, once wrote, "Moxie contains gentian root, which is the path to the good life."

Moxie was designated on May 10, 2005, as the official state soft drink of Maine.